THE PENTAGON is expected to submit a report to Congress in the coming days, giving detailed accounts of US military observations of U̳F̳O̳s.

Also called Unidentified Aerial phenomena (UAPs), the anticipated report acts as an aggregation of different observations and reports by American military and intelligence services. Sue Gough, a P̳e̳n̳t̳a̳g̳o̳n̳ spokesperson, said the issue of U̳F̳O̳s is taken “very seriously” despite decades of military and Government sources deflecting, discrediting or debunking observations and remarks on the unidentified phenomena.

She said: “We take reports of incursions into our airspace – by any aircraft, identified or unidentified – very seriously, and investigate each one.”

On Wednesday last week, several members of Congress were given a confidential briefing on the anticipated report.

Experts have been speculating the reports’ contents for over a month but have warned elements of the document may remain classified for security and counterintelligence reasons.

In April, footage of UAPs and U̳F̳O̳s taken by US Navy Pilots was declassified by the P̳e̳n̳t̳a̳g̳o̳n̳. Speaking to Reuters this week, Alex Dietrich, a retired U.S. Navy Lieutenant Commander, urged the public to keep an open mind about the topic and to report what they see even if they don’t fully understand it.

The fighter pilot was among several aviators from the aircraft carrier USS Nimitz involved in a 2004 encounter off California’s coast with unknown aircraft described as resembling large “Tic Tac” breath mints.

She said the phenomena she saw lacked “any visible flight control surfaces or means of propulsion.”

Ms Dietrich said her higher ups took the event seriously as her account of the incident was “analyzed in a professional, sober way” by the military chain of command. 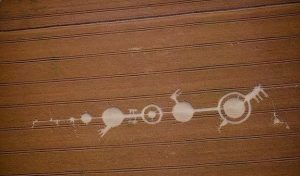 To help eliminate the stigma surrounding the mysterious phenomena she urged the public to “speak up, even if they don’t know what they saw.”

“I’m trying to normalize it by talking about it,” she said, adding: “I hope I’m not the ‘U̳F̳O̳, Tic Tac person’ for the rest of my life.”

Earlier this month, Democratic Congressman Sean Patrick Maloney, told the New York Post: “We take the issue of unexplained aerial phenomena seriously to the extent that we’re dealing with the safety and security of US military personnel or the national security interests of the United States, so we want to know what we’re dealing with.