During the cold war, the US and the Soviet navy had been encountering strange sounds from the dept of ocean off the coast of Norway. Both superpowers put huge efforts into hiding their submarines, and into detecting the other side’s submarines, and as a result, there were huge advances in the technology required for listening for any signals from the ocean depths. As a result, the two navies heard some unusual things.

From the mid-1970s onwards, Soviet submarine crews started to report strange sounds in the waters of the Arctic and North Atlantic oceans. They were driven crazy by “Quackers,” inexplicable and unidentified underwater objects that moved underwater at a speed of 200 kilometers (125 miles) an hour.

NATO assumed that it was Soviet submarines that made the noises until finally one of the commanders of the Soviet Navy asked the Norwegians to catch at least one “Quacker” for him at all costs and promised to reward the Norwegians for it.

In 1991, the US submarine detection system picked up two unidentified signals at once in the Pacific Ocean. Scientists nicknamed one of them “Upsweep,” and the other “Whistle.” Neither one nor the other could be identified. “Upsweep appeared every spring and autumn, and its source was in the middle of the ocean, and Whistle was heard only once.”

In 1997, the US military and ocean explorers were alarmed by a strange signal, which was nicknamed “Bloop.” The U.S. National Oceanic and Atmospheric Administration (NOAA) recorded it roughly triangulated to a remote point in the south Pacific Ocean west off the southern tip of South America, and the sound was detected several times by the Equatorial Pacific Ocean autonomous hydrophone array.

The Bloop was heard at a range of over 5,000 kilometers, and is several times louder than the blue whale, the loudest known underwater animal sound. It was so strange that oceanologists began to joke that it was Cthulhu, a fictional cosmic entity created by writer H. P. Lovecraft. Moreover, scientists could not guess what it was. It seemed like the sound was made by a gigantic living creature.

Finally, scientists from NASA came to the conclusion that these are supposed glaciers rubbing against the bottom of the ocean. Oregon State University seismologist Robert Dziak confirmed that the Bloop was just an icequake.

During the Soviet era, it was restricted to talk about UFOs and USOs but when it got disintegrated, some files came up with shocking information about alien spacecraft. The declassified documents said that the Russian navy found these unidentified objects technologically superior to Earth vehicles.

One of the undated accounts was a Soviet nuclear submarine’s encounter with the formation of six alien spacecraft in the south of the Pacific ocean. At the depth of 260 meters, the six disc-like objects were moving toward the submarine at the speed of 426 km per hour. The crew could not escape their pursuit, and the commander ordered the crew to rise to the surface. The crew saw through the periscope that the objects came out of the water and took off at absurdly fast speed.

According to former nuclear submarine commander Yury Beketov, many mysterious events also took place in the Bermuda Triangle region. The devices failed for no apparent reason. He believed that the UFOs were behind it.

“[In Translation]We have repeatedly observed that devices record the movement of material objects at an unimaginable speed. We measured some speeds – it is about 230 knots (400 km per hour). Such speed is difficult to create on the surface, only in the air. But there is gigantic resistance in the water. As if the laws of physics do not apply to these objects. There is only one conclusion: the creatures who created such material objects significantly surpass us in development,” Beketov said.

Another Navy intelligence Captain Igor Barclay claimed that the unidentified submerged objects were seen in the places where the Russian Navy and NATO fleet are concentrated. He said: “These are the Bahamas and Bermuda, Puerto Rico. Especially often UFOs are seen in the deepest region of the Atlantic – in the south of the Bermuda Triangle and in the Caribbean.”

Whatsoever, something strange has been detected over the years in the oceans. There has been a spate of high-profile claims regarding U.S. Navy nuclear submarines detecting and even interacting with USOs.

The Drive writes: “Tom DeLonge, once the lead man for the rock group Blink 182 turned frontman for To The Stars Academy, a flashy new hybrid entertainment-technology-research group that focuses on disclosure of information regarding UFOs, claimed without any evidence, that ‘a few years ago an unidentified craft was underwater and pinned against the North Atlantic coast by multiple nuclear attack submarines for over a week.’”

The versions of extra-terrestrial activity at Baikal – edged by mountains and containing one-fifth of the world’s unfrozen freshwater – relate to supposed aliens seen by military divers in its depth, and large ‘spaceships’ hovering over its grey, moody expanses. [Source]

Some of the images here show what two photographers claimed were UFOs buzzing the lake, while others are mock-ups based on descriptions of an incident at Kudara-Somon, in Buryatia, exactly a quarter of a century ago. 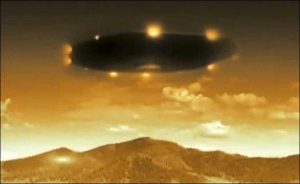 Mock-up of Flying saucer based on accounts by residents of Kudara-Somon village in 1990. Image credit: Siberian times Around the world, there are many places, and especially lakes, that are alleged to be the hot spots of objects that can fly and dive into the water. Can it be possible that there is some unknown civilization living under our oceans and lakes?