U̳F̳O̳ scientist Dr. Jacques F. Vallee states that new legacy evidence indicates that the U.S. military took possession of a crashed flying craft and it’s “occupants” near the site of the first atomic bomb test in July, 1945. The craft reportedly crashed about 20 miles from the test site, a few weeks after the test, just after the Japanese surrender.

In a book released in May 2021, titled “Trinity – The Best Kept S̳e̳c̳r̳e̳t̳,” Vallee, who describes himself as an “information scientist,” and fellow U̳F̳O̳ researcher Paola Harris write of a still-living witness to the crashed object and the efforts of U.S. military personnel to remove the craft from the witnesses’ property, a process of recovery that the book states took nine days.

Vallee and Harris describe the crashed object as “nearly intact,” and “an avocado-shaped object weighing several tons.” Reportedly the crash of the object was viewed by the witnesses who kept silent for 60 years in fear of “retaliation” if they spoke about their sighting.

A press release for the book includes statements in support by the former Minister of National Defense of Canada, Paul Hellyer, and by former deputy Assistant U.S. S̳e̳c̳r̳e̳t̳ary of Defense Christopher Mellon, who stated the information was ”fresh reason to believe our government is concealing physical proof of a̳l̳i̳e̳n̳ technology.”

Despite the credentials of authors Vallee and Harris, and the seeming value of the witnesses, this could be a load of hooey. However, it could also be a significant addition to the documentation of the link between U̳F̳O̳ sightings and nuclear weapons instillations.

Either way, the book’s release comes at a time of a prolonged rash of news stories on the topic of U̳F̳O̳s and just ahead of a U.S government-mandated release of U̳F̳O̳ documents in June, ‘21.

So, in the spectrum from 100% believers in otherworldly beings in physical craft, to skeptics who reject the topic firmly as bunk, where is the best place to be?

I’m in the middle, myself. Show me the solid proof I’ve been waiting for all these years. And if it is produced, then we enter a new era in human history. But will we see that solid proof, or a “limited hangout” with some minor bits of new information, or just government U̳F̳O̳ debunking that will enable mocking of those even mildly interested in the topic?

In 60 years of following the tricky topic of U̳F̳O̳’s I’ve never seen the subject seemingly be treated this seriously, in so many media venues, for such a prolonged period of time. As I have said previously in an article for Gonzo Today, I have seen something major that I can’t explain. But, will the report, instead of confirming the existence of U̳F̳O̳’s, merely qualify people like me for the looney bin?

I Google “U̳F̳O̳,” “U̳F̳O̳ news” and other variants several times a day. It’s amazing what you find these days.

On May 30, as just one example, I Googled the three letters in caps: U̳F̳O̳. Up pops another new mainstream media article link, dated the same day, May 30, this time in ‘USA Today’ Long title: “‘We can’t ignore this’: U̳F̳O̳ sightings spark concern from more than just conspiracy theorists”… Right. Solid stuff.

The article quotes Luis Elizondo, former head of the now-defunct U.S. Government-funded program called the ‘Advanced Aerospace Threat Identification Program,’ or AATIP, as saying “There’s something in our skies that we don’t have an answer for.”

Elizondo is an interesting guy, no doubt about that. The story is that he quit U.S. Intelligence employment in 2017 in protest over government secrecy and coverup. He is partially responsible for the release of the three “P̳e̳n̳t̳a̳g̳o̳n̳ U̳F̳O̳ Videos” – gun camera movies of objects traveling near Navy jets in inexplicable ways.

But Elizondo is essentially a spook who worked with the military intelligence agencies for years. Do we trust this guy?

Google the three letters U̳F̳O̳. Go ahead, do it. As of today, June 2, 2021, there are recent articles on U̳F̳O̳’s in nearly every major news media source. Some are only a couple hours old. Most concern the much-discussed U̳F̳O̳ report due to be released by U.S. military and intelligence agencies no later than June 25. The mandated report stems from a provision embedded in the COVID-19 relief package signed into law by then-President Trump on December 27, 2020. The provision says that the report must be issued to Congress no later than 180 days from the signing date, or June 25, 2021.

How much of the report the American public will actually see is currently unknown.

The U.S. Government has already admitted, decades ago, that U̳F̳O̳s are flying over their nuclear-armed missile silos. That info was first released via the Freedom of Information Act in a 1984 book by authors Fawcett and Greenwood called “Clear Intent: The Government Coverup of the Ufo Experience.”

I trust Dr. Jacques Vallee. Now in his 80s, he is the Dean of Living U̳F̳O̳ Experts. In his new book, he expresses concerns over the current wave of U̳F̳O̳ sightings and news reporting.

If the startling objects being seen by military pilots and other trained observers are so far ahead of our own technology, as discussed by such figures recently as former President Obama, various U.S. Senators, on the ‘60 Minutes’ television program and numerous other notable platforms, the fact that U̳F̳O̳s haven’t seemingly demonstrated open hostility is most likely encouraging.

And given the way people have used nuclear weapons, and may use them again, I can only conclude one thing. 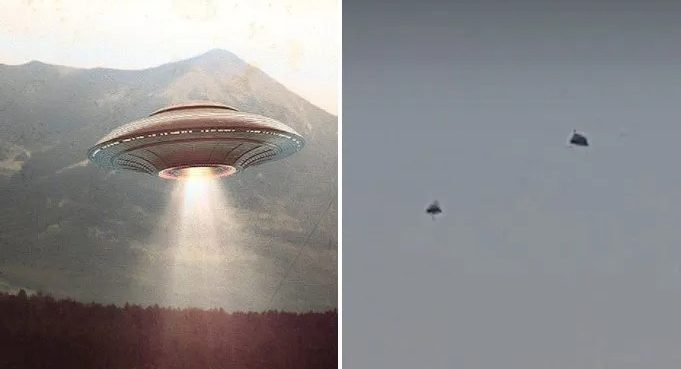 Did A Dying Alien Civilization Send SOS Signal From Andromeda To NASA?