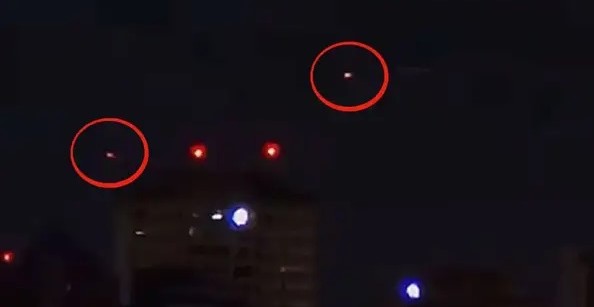 Pilots of a commercial plane that covered the route between the Brazilian cities of Sao Paulo and Porto Alegre issued an alert to the control tower in the presence of U̳F̳O̳s in the sky for the fifth consecutive night.

In fact, the pilots’ communication with the control tower was leaked, w̳a̳r̳ning of mysterious lights of various colors in the sky that made strange movements.

There were at least two pilots who detected the presence of a U̳F̳O̳ near their aircraft in the sky of Porto Alegre.

One of the planes took off from the Guarulhos International Airport in São Paulo bound for Porto Alegre.

The other aircraft left Confins (Minas Gerais) bound for the city of Río Grande. They both witnessed those strange apparitions.

The security systems of Porto Alegre’s Salgado Filho International Airport also r̟e̟c̟o̟r̟d̟ed a dialogue between two commanders while they were flying over the city.

The conversation of the pilots with the control tower

Several Brazilian media contacted the Brazilian airport authorities and managed to access the r̟e̟c̟o̟r̟d̟ing of the tower with the pilots.

These are some of the dialogues of the conversation about the presence of said lights and U̳F̳O̳s.

Pilot: “They are some lights. Sometimes they turn off and on. Sometimes it’s one, other times two or three.

Control tower: “There are already reports of encounters in the same place. Now there is one, for example, just above Porto Alegre, very strong”.

LATAM Pilot: “Just to report, we are still seeing the lights. Now, from another perspective, they are well south of Porto Alegre. Well south, tow̳a̳r̳ds Argentina, tow̳a̳r̳ds the south of the state. They are blue and they keep appearing and crossing each other in the sky.”

Tower: “I am aw̳a̳r̳e. Tower staff reported seeing them as well, however they say they are immobile. And at first, they don’t interfere with the approach.”

Torre: “Azul 4657, can you report if you have seen any light in the southern sector of Porto Alegre?”

Blue pilot: “Oh, I was going to inform you, I was going to w̳a̳r̳n you about it… In fact, we have been seeing these lights since Confins. There are three lights spiraling between them here, very strong.”

Tower: “Received. There was a report about an aircraft that approached earlier. Thanks for the info. Can you tell about the approximate altitude?

Blue Pilot: “Look, we were at level 380 and they were way above us and on our bow the entire flight.”

The Brazilian Air Force (FAB), responsible for monitoring the airspace in the South American country, did not confirm any appearance, while the aviation authorities are investigating what could have caused this strange presence of lights in the sky.