In this age of military drones, cruise missiles, spy satellites and classified secret weapons, it would see obvious that people living in a war zone would see a large number of unidentified aerial phenomena in their skies. Since the hottest war zone of the planet at the moment is Ukraine, it should come as no surprise that this is also a hotbed of UAPs. While the United States is not a war zone (at least by the classical definition), it is still covered with military bases conducting training, weapons tests and simulated operations that put drones, planes, flares and UAPs in the sky. As the mainstream media has finally caught on, reports of these encounters have alerted the public, and demands for explanations have moved the Pentagon and most recently NASA to set up departments and conduct investigations into UAPs. Since it is the current major war zone of the planet, it should come as no surprise that a Ukraine astronomy group, the Main Astronomical Observatory of NAS of Ukraine, is also looking at its own UAPs in hopes of identifying them for its citizens. What IS a surprise is the sheer number of UAPs in that country’s skies and that the study conducted found some UAPs it could not identify. The techniques used are different than those we’ve seen in the U.S. Let’s take a look at them first, and then at what the study found and the conclusions it reached.

“Our astronomical work is daytime observations of meteors and space invasions. Unidentified anomalous, air, and space objects are deeply concealed phenomena. The main feature of the UAP is its extremely high speed.”

The study, titled “Unidentified aerial phenomena I. Observations of events,” was commissioned precisely because there have been so many UAPs over Ukraine during the six months (so far) of war with Russia. The observations by the Main Astronomical Observatory of NAS came from its main observatory in Kyiv and another observatory in Vinarivka 75 miles south of Kyiv. Although these locations are not where the bulk of the ground fighting has been, they have seen their share of missile attacks and, since Kyiv is the capital, aerial observations. Since many UAPs are difficult to observe due to their speed, the study authors developed a “special observation technique” to take that into account. Using this technique to track the same UAPs from both locations, they identified two types of UAPs which they named Cosmics and Phantoms.

“We note that Cosmics are luminous objects, brighter than the background of the sky. We call them names of birds (swift, falcon, eagle). Phantoms are dark objects, with a contrast, according to our data, from 50% to several per cent.”

The study goes into great depth explaining how the astronomers, trained to search for incoming meteors and other space objects heading towards Earth, used the colors, brightness, positions and speed of the objects in comparison to known space objects, like the Moon, to determine the size and mass of the many UAPs they spotted. One interesting correlation they found was that in many cases “the “speeds” correlate with the brightness, namely, the greater the brightness, the greater the speed.” Photos of the objects and charts plotting their speeds and analyses of their colors are included in the study.

Before we look at their answer, we should point out that the skies over Ukraine had UAPs long before the invasion by Russia, and tales of strange ships and alien encounters were abundant. Perhaps the most unusual is the alleged existence of “ancient space arks” buried in Ukraine that were the real reason Vladimir Putin invaded the country – to gain possession of them for nefarious purposes other that why the aliens left there … which isn’t really clear. In 2004, a number of tourists in the area of Partenit, Crimea, reported seeing a strange UFO over the sea heading towards some nearby mountains – it was close enough to see details of the outside of the craft and some sort of propulsion emissions. The object appeared to land or crash in the mountains, whereupon eight smaller objects arose from the same location and flew away. Going further back to 1952, there were reports from Belgorod-Dnestrovskiy in the rural Odessa region of Ukraine of UFOs and an ancient alien fortress or base with a network of subterranean tunnels. In 2019, multiple witnesses recorded six strange orange lights in what appeared to be a deliberate formation over Crimea. There are many more … Ukraine has had its share of UFO sightings.

“We observed a broad range of UAPs everywhere.”

Back to the researchers looking at the recent skies over and around Kyiv. They also saw a lot of UAPs which they described as “flights of single, group and squadrons of the ships were detected, moving at speeds from 3 to 15 degrees per second. Some bright objects exhibit regular brightness variability in the range of 10 – 20 Hz.” This applied to both “phantoms” and “cosmics.” It seems obvious that “squadrons of ships” could definitely be war-related drones, missiles, planes or other aerial weapons. However, that did not apply to all of them. 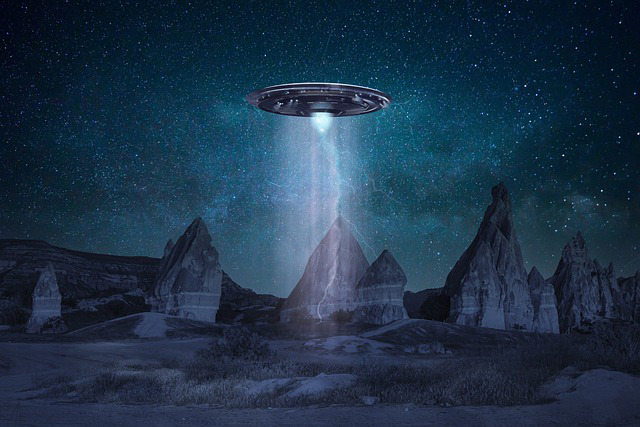 “We state a significant number of objects whose nature is not clear.”

It is important to note that these astronomers were not specifically looking for drones, missiles, satellites and planes – they were looking at all of the objects in the sky. IN fact, they specifically avoided mentioning the ongoing war. Their goal was not to identify planes, missiles and drones by their model numbers or capabilities – they were looking to eliminate them to see what was left. And what was left was a significant number of unidentifiable phenomena.

It appears that the astronomers in this study will continue to search for UAPs over Ukraine. Their two-telescope technique for tracking high-speed objects is one that should be considered by other groups analyzing their skies for UAPs. Let’s hope the war is over soon and these astronomers can get a less cluttered look at the unidentified objects over Ukraine.