Were Aliens Behind Dr. Von Braun’s Success? He Predicted “ELON” Would Take Humans To Mars

There are few sci-fiction stories written in the past that came out to be true. Beginning with Jules Verne’s 1865 novel “From the Earth to the Moon,” it was predicted that a man would land on the lunar surface. The predictions about future events such as the end of Earth or humanity were discussed in the various ancient texts. People like Nostradamus and Baba Vanga are known for their predictions which later turned out to be true. Does it mean that our destiny is already written?

Wernher von Braun—a German scientist, considered as one of the most important rocket designers of the 20th century, and was the design chief of the V-2 rocket, as well as the Saturn V rocket, which took mankind to the Moon.

Shockingly in Chapter 24, von Braun wrote that Mars would be governed by someone designated as “Elon.” He wrote: “The Martian government was directed by ten men, the leader of whom was elected by universal suffrage for five years and entitled “Elon.” Two houses of Parliament enacted the laws to be administered by the Elon and his cabinet. The Upper House was called the Council of the Elders and was limited to a membership of 60 persons, each being appointed for life by the Elon as vacancies occurred by death.” The English translation of the book was later published in 1953 by the University of Illinois. 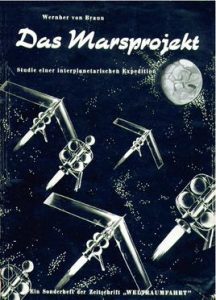 Von Braun adamantly believed that the future of human civilization was in space. Some ancient astronaut theorists believe that he was guided by otherworldly forces. “Maybe he drew his inspiration from science fiction, maybe it came from his own imagination and vision of what the future should be, or maybe it was inspired by something extraterrestrial,” said Nick Pope, a former head of UK’s Ministry of Defence for investigating UFO phenomena.

David Wilcock and Giorgio Tsoukalos suggested that Von Braun might have had an extraterrestrial intervention that provided him access to abundant knowledge.

According to one UFO conspiracy, a young beautiful woman named Maria Orsic came forward and wanted to help Nazis in building flying saucers. She said that she could communicate with extraterrestrials. Later, she founded her own society known as “The Vril” after she communicated with aliens who had lived during the time of Sumerians. These beings left Earth and went to the Aldebaran solar system. The word “Vril” actually came from an ancient Sumerian word “Vri-ll,” which means “God-like.”

Due to the similarities between the novel and Maria Orsic, it is difficult for people to choose between reality and fiction. But famous German scientist and physicist Hermann Oberth, who is one of the founders of rocket and space science, was the supporter of the extraterrestrial hypothesis for the origin of UFOs. Oberth was considered by many to be the most famous mentor of Wernher von Braun. In the spring of 1930, young Wernher von Braun enrolled at the Berlin Institute of Technology and in his spare time assisted Oberth in his early experiments in testing a liquid-fueled rocket stage.

Tags: Were Aliens Behind Dr. Von Braun’s Success? He Predicted “ELON” Would Take Humans To Mars