Throughout ancient history, UFO sightings have been recorded in various parts of the world. These unexplained aerial phenomena raise a question about the existence of extraterrestrial life beyond the exosphere. For many years, various attempts have been taken by the mainstream media to diminish the importance of UFOs and tried to create the public belief that UFOs are part of some form of an elaborate hoax. Nevertheless, UFOs have been reported throughout history, from prehistoric times up until the present day.

There are certainly other pre-historic rock paintings, which bear a similarity to images painted centuries later in the 16th century Summer’s Triumph Tapestry, and which are also tied in closely with modern-day UFO accounts. Another intrigued account of cave paintings that depicts ancient aliens is the Aboriginal cave paintings of the “Wandjina” spirits.

Nevertheless, pre-historic paintings and rock arts can be ruled out by mistaking them as comets, stars, or planets in the sky. But there are several accounts from the last seven hundred years that hint at the possible UFO encounters. 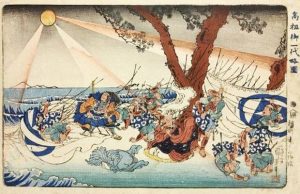 Nichiren was imprisoned with his pupil Nichirö and ordered to be decapitated at Tatsunokuchi in the province of Sagami. However, Nichiren’s mystical powers caused the executioner’s sword to break. Here Nichiren is depicted in prayer on the shore under a pine tree, while his would-be executioner’s sword is shattered and the rest of the party is thrown into confusion by rays emanating from the sun. Image credit: Utagawa Kuniyoshi

The great Buddhist reformer Nichiren (1222 – ’82) avoided execution due to the appearance of a UFO that appeared in the sky like the full moon. Perhaps, the first official investigation of a UFO sighting occurred in Japan in 1235, when Nichiren was only 13 years old. As for the second one, he was about to be executed by beheading at Tatsunokuchi Kamakura, Japan in 1271, when there appeared an object like a full moon in the sky. The officials panicked and abandoned the execution, and the famous monk survived another eleven years.

William Of Newburgh (1136-1198), an English chronicler who is remembered as the author of one of the most valuable historical works on 11th- and 12th-century England. The Chronicle of William of Newburgh tells that in 1290, in Byland Abbey in Yorkshire, the abbot and monks were at a meal when a ‘flat, round, shining silvery object’ flew over the abbey and ’caused the utmost terror.’

In The Taiheiki: A Chronicle of Medieval Japan there is a mentioning of five “stars” that appeared over Japan. They circled the moon, changed colors three times, then disappeared. The citizens of Kyoto were so distressed by this event that they ran and hid, expecting the arrival of horrible disasters.

Jacques Duclercq, legal adviser to Philippe III, writes: “On this day of Our Lord, All Saints Day, there appeared in the sky an object as bright as burning steel, as long and wide as half of the moon. It was stationary for fifteen minutes. Suddenly, the strange object began to spiral upwards and then it spun around and rolled over like a loose watch spring, after which it disappeared in the sky.”

The light seen by Columbus

On October 11, 1492, in Guanahany, Bahamas, Christopher Columbus and a crew member saw a light alternately going higher and lower. The actual passage reads as follows: “The land was first seen by a sailor called Rodrigo de Triana, although the Admiral at ten o’clock that evening standing on the quarter-deck saw a light, but so small a body that he could not affirm it to be land; calling to Pero Gutierrez, broom of the King’s wardrobe, he told him he saw a light, and bid him look that way, which he did and saw it; he did the same to Rodrigo Sanchez of Segovia, whom the King and Queen had sent with the squadron as comptroller, but he was unable to see it from his situation.

The Admiral again perceived it once or twice, appearing like the light of a wax candle moving up and down, which some thought an indication of land. But the Admiral held it for certain that land was near; for which reason, after they had said the Salve which the seamen are accustomed to repeat and chant after their fashion, the Admiral directed 10 3 them to keep a strict watch upon the forecastle and look out diligently for land, and to him who should first discover it he promised a silken jacket, besides the reward which the King and Queen had offered, which was an annuity of ten thousand maravedis.”

On April 14, 1561, a horrific incident occurred in Nuremberg that became one of the unexplained sightings in history. Several residents saw numbers of objects in various shapes (cylindrical, spherical, triangular) in the sky during the sunrise between 4 and 5 a.m. They described the scene as a dogfight. The objects flew across the sky and some eyewitnesses claimed to have seen a black triangular object before hearing a distinctive crash coming from the outer regions of the city.

In Basel, Switzerland, a large number of black spheres were flying all over the sky. They appeared to be fighting one another. This battle was witnessed by hundreds of people. Describing this activity, a newspaper article written by Samuel Coccius said: “Many became fiery and red, ending by being consumed and vanishing.”

In Sheffield, England, astronomer Thomas Short described the following: “A dark red cloud, below which was a luminous body which emitted intense beams of light. The light beams moved slowly for a while, then stopped. Suddenly, it became so hot that I could take off my shirt even though I was out of doors.”

A similar object appeared on the same day over Romania. “In the afternoon, an object only described as a “Symbolic form,” blood-red in color, appeared from the west. After remaining in the sky for two hours it split into two parts that shortly joined again and went back towards the west.”

On August 18, 1783, a luminous object was seen in the sky at around 9.45 p.m. by four witnesses from the terrace of Windsor Castle in the English county of Berkshire. Many people across the English county claimed to have seen it, but the seven witnesses who were present at the Castle to document the incident were: Thomas Sandby, a founder of the Royal Academy, his brother Paul, Tiberius Cavallo, Dr. James Lind, Dr. Lockman, and two unknown women. 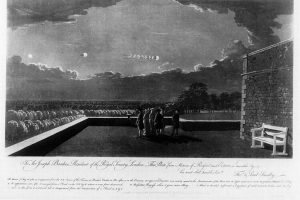 Print showing members of the nobility (King George III?) observing a very bright shooting star called a bolide from the terraces of the royal palace of Windsor Castle. Titled ‘The meteor of August 18, 1783…’, the aquatint was produced by Thomas Sandby after a watercolor by Paul Sandby. The dazzlingly bright meteor was seen widely in surrounding areas of England and disintegrated into several parts.

The sighting was recorded the following year in the Philosophical Transactions of the Royal Society (1784), who relates what the witnesses observed:

“An oblong cloud moving more or less parallel to the horizon. Under this cloud could be seen a luminous object which soon became spherical, brilliantly lit, which came to a halt; this strange sphere seemed at first to be pale blue in color but then its luminosity increased and soon it set off again towards the East. Then the object changed direction and moved parallel to the horizon before disappearing to the South-East; the light it gave out was prodigious; it lit us everything on the ground.”