An 1800-year-old Sarcophagus that archaeologists claim the oldest sarcophagus ever found has been unravelled during a building project. The Israel Antiquities Authority (IAA) reported—but construction workers are now being accused of damaging, and then trying to hide, the massive Roman-era coffin.

The workers uncovered the Roman sarcophagus as they built villas on the Mediterranean coast of Israel, in Ashkelon. According to the IAA, the find is one of the rarest sarcophagi ever found.

The 8.2-foot-long (2.5 meters) coffin is sculpted on every sides, with life-size carvings of a man with a Roman haircut on one surface of his tent-shaped lid.

In the carving, the man is leaning on his left arm and wearing a tunic around his waist and a short-sleeved shirt decorated with embroidery, Gabriel Mazor, a retired IAA archaeologist and an expert on classical periods, said in a statement.

“The figure’s eyes were apparently inlaid with precious stones that have disappeared, and the hair is arranged in curls, in a typical Roman hairstyle,” Mazor said. 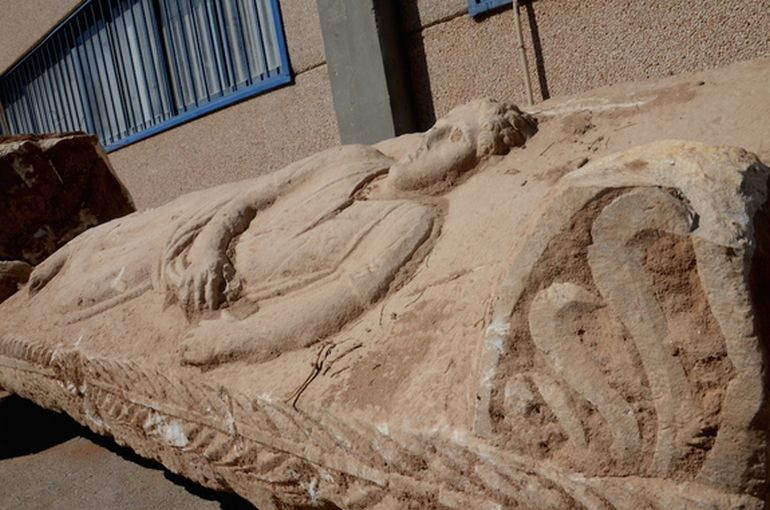 On the other side of the lid, A̳n̳c̳i̳e̳n̳t̳ artists carved a metal amphora (a vessel used to carry liquids, such as wine) intertwined with gr̳a̳p̳e̳ clusters and leaves.

The sarcophagus’ sides are decorated with “wreaths and images of bulls’ heads, naked cupids, and the head of the monstrous female figure Medusa, which includes remains of hair together with snakes, part of a commonly held belief in the Roman period that she protects the deceased,” Mazor said.

It’s unclear who was buried in the sarcophagus, but that person was undoubtedly from a wealthy family, he added. 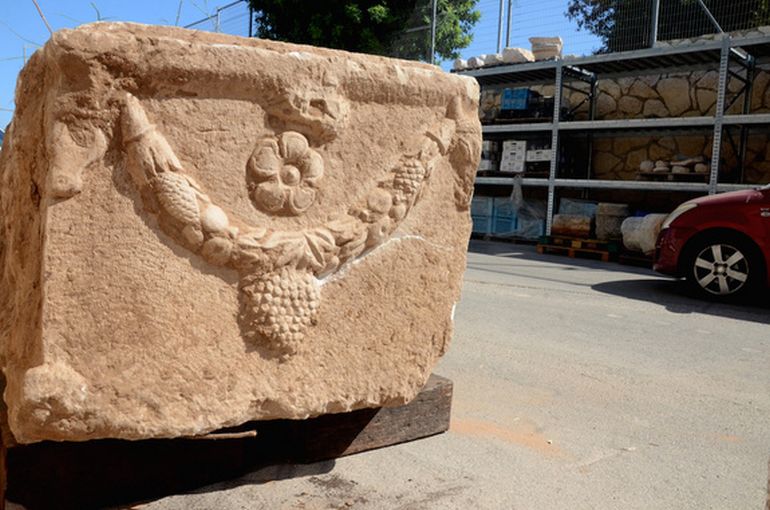 “Such sarcophagi were usually placed in or next to a family mausoleum,” Mazor said. “The high level of decoration attested to the family’s affluence, which, judging by the depicted motifs, was probably not Jewish.”

The construction workers found the sarcophagus last week, the IAA reported. But instead of contacting authorities, it appears that the workers pulled the sarcophagus out of the ground with a tractor — a move that reportedly damaged all sides of the A̳n̳c̳i̳e̳n̳t̳ artifact.

The workers allegedly hid the coffin beneath a stack of sheet metal and boards, the IAA reported. Then, they reportedly poured a new concrete floor in the lot so they could conceal that they had removed the sarcophagus, the IAA said.

However, tipsters told the IAA Unit for the Prevention of Antiquities Robbery about the site, prompting a nighttime search on Tuesday night (Sept. 1). IAA inspectors and Ashkelon police officers and detectives found and detained five construction workers from Hebron in the West Bank who were sleeping at the building site.

When questioned, the workers showed the investigators photos and videos taken from when they discovered and removed the sarcophagus from the ground.

An inspection of the sarcophagus showed that the tractor had struck it in several places, scarring the stone and damaging the decorations on the coffin’s sides. Later that night, the investigation team detained two more building contractors who live in the city.

The alleged crime carries a strong sentence. Not reporting an A̳n̳c̳i̳e̳n̳t̳ discovery, damaging the site and damaging its artifacts are offenses punishable by five years in prison, the IAA said.

“This is an extremely serious case of damage to a rare antiquity of unprecedented artistic, historical and cultural importance,” said Amir Ganor, head of the IAA inspection department. “Out of consideration for the owners of the lots, we permitted building in the new neighborhood of villas, on condition they would report any discovery of antiquities in the area right away and immediately halt work until the arrival of our representative. In this case, the building contractors chose to hide the rare artifact, and their action has caused painful damage to history.”

The IAA plans to take legal action against the parties involved, which will delay the construction project, the IAA reported.

“The proper way to operate in an A̳n̳c̳i̳e̳n̳t̳ and important historic city such as Ashkelon is with transparency, openness and close cooperation between the property owners and the IAA,” Ganor said. “Only in this way will the development of the city be possible while protecting public assets, for the common good.”