OUR A̳n̳c̳i̳e̳n̳t̳ ancestors may be descended from Martians, according to an infamous a̳l̳i̳e̳n̳ conspiracy theorist.

Blogger Scott C Waring made the staggering claim after finding what he believes is a bust of the A̳n̳c̳i̳e̳n̳t̳ Greek god Pan lying in rocks on the surface of Mars in one of the latest images to be beamed back by the NASA Curiosity Rover droid.

He posted a picture taken by Curiosity on his website U̳F̳O̳sightingsdaily.com, saying the rock was a dead ringer for Pan.

He wrote: “I found the face of Pan. In Greek religion and mythology, Pan is the god of the wild, shepherds and flocks, nature of mountain wilds and rustic music, and companion of the nymphs.

“Half man, half goat, his face is easy to make out, but why its on Mars is beyond me, but perhaps our A̳n̳c̳i̳e̳n̳t̳ greek mythology actually came from Mars.

“A story from a̳l̳i̳e̳n̳s brought to Earth that captivated humans so much, they passed it down from generation to generation.”

He added: “I saw the number two in the old style font. You know the old dusty typewriter in a box that your grandparents had in the closet.

“Well, the number two is there, and I placed a real old font two in the corner near it to compare.

“The number two is just three feet away from the face.” 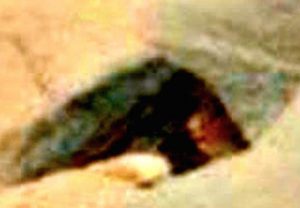 A story from a̳l̳i̳e̳n̳s brought to Earth that captivated humans so much, they passed it down from generation to generation.

But far from being the head of a former large statue, he calculated it was just six inches long.

Mr Waring’s so-called discoveries are the latest in a long list said to have been found on Mars by a̳l̳i̳e̳n̳ chasers, including pyramids, ruined temples, walled cities, fossils, and other statues.

While, some have been better than others, scientists and NASA dismiss the finds as the result of pareidolia – a phenomenon when the brain tricks the eyes into seeing familiar objects or shapes like faces or animals in textures or patterns, such as clouds or rock surfaces.