75-million-year-old rock formation in Thailand looks like a crashed spaceship The “Three Whale Rock” At the top of the Hin Sam Wan mountain in Phu Sing, Bueng Kan Province, Thailand. 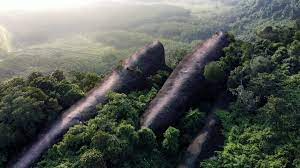 This rock formation dates from around 75 million years ago and earned its name because, from the right perspective, it looks like a family of whales. The tops are eroded by people walking on them, which makes them look like metallic copper.

Watch the following video: Thank you for reading & sharing.this!