World cinema has created for the audience many images of an a̳l̳i̳e̳n̳. We’ve seen Leeloo from The Fifth Element and the humanoid from Spielberg’s ET, Neytiri from Avatar, or the humanoid lizard from the movie Signs.

But what do a̳l̳i̳e̳n̳s actually look like? On this score, scientists have quite reasonable ideas.

Researchers believe that external diversity is actually quite severely limited by the laws of the universe. Astrobiologist, professor at the University of Edinburgh Charles Cockell, author of the book “The Equations of Life: How Physics Shapes Evolution” names three restrictions that all life forms, without exception, must follow.

“Physical laws are the same everywhere. For example, the force of gravity acts not only in the solar system, but also outside it.

In every corner of the universe, life will use the same ingredients. Carbon is the optimal chemical element for the origin of life, and water is the ideal fluid for its transport.

What does this mean in practice? We know that there are three aggregate states of matter: solid, liquid and gaseous. And if the habitat of a̳l̳i̳e̳n̳s is gas, then they must comply with the laws of aerodynamics.

In the same way as pterodactyls, sparrows, dragonflies and paper planes obeyed these rules. If our brothers in mind live in water, then they are subject to the laws of hydrodynamics and hydrostatics (the law of Archimedes in particular), therefore, the a̳l̳i̳e̳n̳s must have an elongated streamlined body shape.

Those who live on a hard surface need limbs (paws, legs, arms) to reduce friction. Or, use the method of movement of snakes, which do well without limbs. Thus, structurally, the a̳l̳i̳e̳n̳s will most likely be similar to the inhabitants of the Earth,

Will a̳l̳i̳e̳n̳s have sense organs? It depends on the environment, says the president of the German Astrobiological Society, Dirk Schulze-Makuch of the Technical University of Berlin.

Who needs ears if there is no medium for transmitting sound waves? Light-sensitive organs on our planet have been developed by almost all living beings: vision takes on a variety of forms from the complex eye of a fly to the stereo vision of a person. But a̳l̳i̳e̳n̳s may not need eyes if they live in places where light cannot penetrate.

In the case of contact with ex̳t̳r̳a̳t̳e̳r̳r̳e̳s̳t̳r̳i̳a̳l̳ intelligence, we will have to deal with predators – most scientists agree on this. And it’s not just that there are no examples of thinking plants and fungi on Earth.

It just makes no sense for a stationary organism to develop the rate of reactions and expend energy to maintain a high level of metabolism. Still, the mind is an expensive pleasure, for example, the human brain weighs 2% of the mass of the body, and consumes 25 percent of energy.

Not everyone can afford such a luxury. The brain pays off only if the living organism needs to look for food or save itself from the fate of becoming food.

Then why can’t a̳l̳i̳e̳n̳s be descendants of herbivores? The fact is that plant foods provide less energy than other animal foods. It would be difficult for smart herbivores to develop their intelligence, because they would spend a lot of time on the process of eating low-calorie plant foods. From this point of view, carnivorous creatures have much more free time from eating.

So, most likely, the a̳l̳i̳e̳n̳s with whom we will have to deal (unless, of course, we are alone in the Universe) are in the past a pack of predators. That is why many scientists are w̳a̳r̳y of attempts to establish contacts with ex̳t̳r̳a̳t̳e̳r̳r̳e̳s̳t̳r̳i̳a̳l̳ intelligence.

However, it is unlikely that guests from the space will be our mirror image. A brain in a big head, a nose above the mouth – all this tuning, fashionable in the solar system, is likely to be irrelevant in other parts of the universe.

Even on Earth, some innovators go the other way. For example, in octopuses, neurons are distributed throughout the body, including tentacles, and only a small part of the brain is in the head, recalls Dr. Dirk Schulze-Makuch.

Birds, in an effort to reduce their flight mass, have acquired a very useful thing: their packing of neurons in the brain is much denser than that of humans. By the way, this is why we underestimate their intelligence, relying on such a seemingly reliable indicator as the ratio of head to body weight.

Meanwhile, the New Caledonian crows are able not only to use tools, but also to create them themselves. And in terms of intelligence they are not inferior to primates.

Finally, a̳l̳i̳e̳n̳s can be not just a creation of nature, but a kind of symbiosis with high technology.

“People have already built into their bodies such technical devices as contact lenses, pacemakers and all kinds of prostheses,” explains Dirk Schulze-Makuch.

“A̳l̳i̳e̳n̳s are quite capable of going further in turning themselves into cyborgs.For example, they can load the brain into an electronic-mechanical shell and circumvent the limitations imposed by nature on the lifespan of organic bodies.

“And if you asked me what the a̳l̳i̳e̳n̳s would look like, I would say that the most advanced of them will be fully mechanized.” 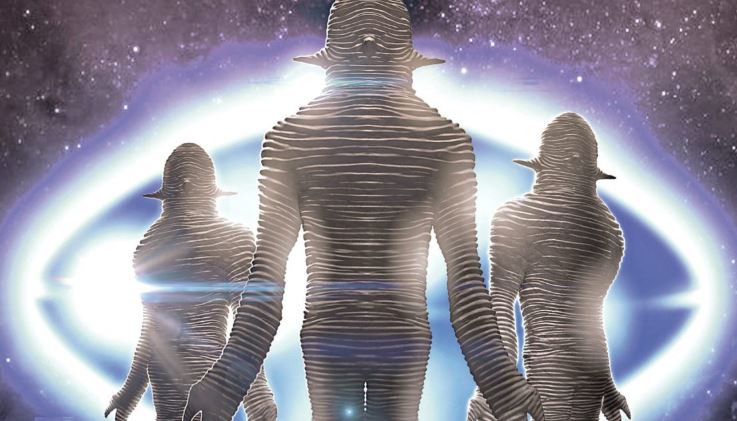