It\’s a fact that U̳F̳O̳s come in all shapes and sizes. Some craft, however, are undeniably huge. With that said, let\’s have a look at some classic cases that fall into the Mother-Ship category. We\’ll begin with an amazing account from the United Kingdom\’s Civil Aviation Authority. As the CAA state in their records from the 1980s: “The Civil Aviation Authority (CAA) is responsible for the regulation of aviation safety in the U.K., determining policy for the use of airspace, the economic regulation of Heathrow, Gatwick and Stansted airports, the licensing and financial fitness of airlines and the management of the ATOL financial protection scheme for holidaymakers.” Over the years the CAA has received a number of U̳F̳O̳ reports, something that is hardly surprising. Let\’s take a look at one such CAA report that is focused on a U̳F̳O̳ of huge proportions. The summary of the report reads as follows: “12 Jun 82 Dinkelsbuhl – Large translucent object 500 feet long at 41,000 feet [italics mine]. ATCC [Air Traffic Control Center] requested subject aircraft to investigate this object which was found to have the form of a double rectangle surmounted by a globe (egg shape) crowned by a silver cone. Object observed by all on board.” Now, let\’s jump way back to the early 1950s.

Consider this case from 1951, which is described in the F̳B̳I̳ files of Fort Monmouth, New Jersey: “On September 20, Andrew J. Reid G-2 [Army Intelligence] Ft. Monmouth, NJ, provided following report of unconventional aircraft observed by radar at above Army installation. On Sept 10, fifty one], an AN/MPG-1 radar set picked up a fast moving low flying target, exact altitude undetermined at approximately 11:10 a.m., southeast of Ft. Monmouth at a range of about twelve thousand yards. The target appeared to approximately follow the coast line, changing its range only slightly but changing its azimuth rapidly. The radar set was set to full aided azimuth tracking which normally is fast enough to track jet aircraft, but in this case was too slow to be resorted to. Target was lost in the N.E. at a range of about fourteen thousand yards. “This target also presented an unusually strong return for aircraft, being comparable in strength to that usually received from a coastal ship [italics mine]. The operator initially identified target as a ship and then realized that it could not be a ship after he observed its extreme speed.” The size of a ship? That\’s pretty impressive. One year after the Fort Monmouth affair, there was another case of the Mother-Ship type, as you\’ll see now:

In 1952, radar operator William Maguire had an extraordinary, radar-based U̳F̳O̳ encounter. It was while he was stationed at Royal Air Force Sandwich in Kent, England. Of his experience, Maguire said: “The mechanics were being blamed for not calibrating the instruments properly; we were being blamed for not interpreting the readings properly. But the obvious answer staring us in the face, on every single instrument on the base, was the fact that there was sitting up at an unbelievable height, this enormous thing with the equivalent mass of a w̳a̳r̳ship.” Similarly, there are the words of John Oliver, who had his encounter with a huge U̳F̳O̳ in 1949. Once again, it was a radar-based encounter. He recalled: “The general consensus regarding its size, among the very experienced radar personnel engaged in the operations, was that the object offered an echo similar to that of a large passenger or freighter surface vessel, something in the region of 15,000 or 20,00 tons [italics mine].”

(Nick Redfern) The files of the Royal Air Force on the West Freugh incident of 1957 (below) can be found at the U.K. National Archives 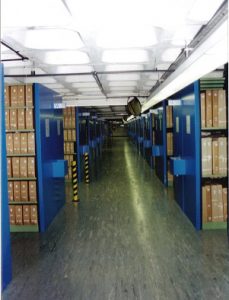 Now, let\’s jump to the late 1950s. On the morning of April 4, 1957 – according to now-declassified British Royal Air Force documents housed at the National Archive, Kew, England – radar operators at Balscalloch, Scotland reported to RAF West Freugh, Wigtownshire that they had detected a number of “unidentified objects on the screens of their radars.” And it quickly became apparent this was no Cold W̳a̳r̳ penetration of British airspace by Soviet spy-planes or bombers. As the mystified radar-operators watched their screens, they were amazed to see a large, stationary object hovering at 50,000 feet that then proceeded to ascend vertically to no less than 70,000 feet. According to the files: “A second radar was switched on and detected the object at the same range and height.” Most significant of all at this stage was the assessment by the radar experts of the incredible proportions of the U̳F̳O̳s: “It was noted by the radar operators that the sizes of the echoes were considerably larger than would be expected from normal aircraft. In fact they considered that the size was nearer that of a ship’s echo [italics mine].” Now, things get very controversial. It\’s time to focus on the Contactees and the Space Brothers.

It was early on the morning of November 20, 1952, when George Adamski and his faithful secretary Lucy McGinnis drove to Blythe, California. This was not your average road-trip, however. Adamski, when telling the story to whoever would listen, claimed that the reason for hitting the road to Blythe had an astonishing purpose behind it: a̳l̳i̳e̳n̳s dearly wanted to meet with the professor-who-wasn’t. The pair soon met up with other characters in 1950s-era Ufology. They included U̳F̳O̳ enthusiasts Al and Betty Bailey, and George Hunt Williamson. The latter was a controversial contactee who crossed paths with the F̳B̳I̳ on several occasions, most seriously in 1962. That was when Williamson was suspected by the Bureau of smuggling priceless Mexican artifacts of an historic and archaeological significance into the United States. After refueling their vehicles and their stomachs, the gang then headed out to Parker, Arizona – where, Adamski said, he was absolutely sure that a̳l̳i̳e̳n̳s were soon to put in an appearance. So the tale goes, that’s exactly what happened: A huge, “cigar”-shaped U̳F̳O̳ loomed into view, high in the skies above Parker. The amazed crew hit a dirt-road in hot pursuit of the mighty craft. Adamski and co. were, apparently, not the only ones who were looking for a close encounter. Adamski claimed that a squadron of U.S. Air Force planes were also after the a̳l̳i̳e̳n̳s. The people from the stars almost effortlessly made a quick escape from the pursuing pilots.

It wasn’t long before a much smaller flying saucer made its appearance. In an almost Old Testament-style fashion, the gleaming craft landed on a nearby mountain, awaiting the disciple-like Adamski to come forw̳a̳r̳d and meet his superior. He somehow knew that the a̳l̳i̳e̳n̳s had come for him. Adamski approached the craft, while the rest – their mouths no doubt agape – looked on. An extremely-human-looking ex̳t̳r̳a̳t̳e̳r̳r̳e̳s̳t̳r̳i̳a̳l̳ exited the futuristic craft, just as Michael Rennie’s character of Klaatu did in the classic 1951 movie, The Day the Earth Stood Still. Unlike Klaatu, though, Adamski’s a̳l̳i̳e̳n̳ – who announced himself as Orthon – had long hair of the kind that just about any and every 1980s-era “hair-metal” rock band would have been proud to sport.

Orthon announced to Adamski that he came from Venus – and that he came in peace, too. In no time at all, Orthon began lecturing Adamski on why we, the human race, needed to ditch our atomic weapons. If we didn’t, the only outcome would be overwhelming, worldwide destruction. Not only that, Orthon wanted Adamski to be one of the key figures in the plan to save the Earth and its people. In an instant, Adamski was up for the challenge. Orthon, seemingly happy with the outcome, returned to his flying saucer and shot off into the skies. An a̳l̳i̳e̳n̳ had come and gone, and for Adamski a new life had just begun. It should be stressed that Adamski was (allegedly) seeing huge U̳F̳O̳s when so were the U.S. military, as we have seen: the early 1950s. My view on the matter of Adamski and Mother-Ships? A coincidence mixed with more than a few outright lies. For example, take a look at the F̳B̳I̳\’s file on Adamski: it makes it 100 percent that Adamski was not only a liar, but also someone who even doctored U.S. government documentation to further his U̳F̳O̳logical goals. So, as I see it, and when it comes to the Mother-Ship issue, we have – for the most part – highly credible cases. But, admittedly, the matter is somewhat blurred “all thanks” to Adamski and his run-ins with the F̳B̳I̳ and J. Edgar Hoover.