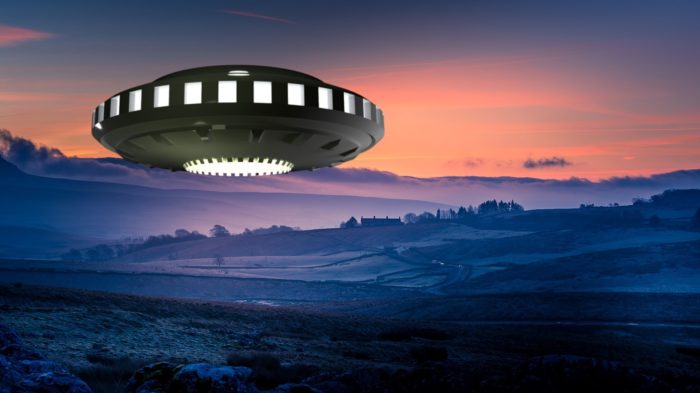 An encounter shortly after midnight one evening in September 1980 on a farm in Victoria, Australia, would see a bizarre disc-shaped object land and retrieve the contents of the farm’s water tank. All was witnessed by the on-site caretaker, and at close-range to boot. Furthermore, corroboration of the event would come from a second witness. And over the weeks that followed, several similar sightings in the area would lend the report at the White-Acre farm even more credibility.

What’s more, the incident is one where physical evidence remained for a considerable time afterward. And further still, in sympathy with the subsequent sightings after the White-Acre incident, similar physical evidence would also come to light. The sighting remains unexplained but continues to intrigue those in the U̳F̳O̳ community.

“A Screeching Whistle” Over The White-Acre Farm

In the early hours of 30th September 1980, a little after 1 am at the White-Acres property near Rosedale, Victoria, Australia, the 54-year-old caretaker of the site was woken suddenly by a sound like “a screeching whistle” [1] coming from outside the house. The cattle were also seemingly significantly spooked at whatever was happening, their bellowing constant in the background.

Without dressing and wearing only his night clothes, he went to the back door to examine the cause of the commotion. He stepped outside and onto a wooden rail that ran immediately outside the house so as to get a clear view of the farm’s fields and outbuildings. It was then that the strange “domed disc-shaped craft”, flashing orange and blue lights, went across his field of vision from left to right. It was only ten feet from the ground and appeared to be no more than 500 feet away from him. He would estimate it to be around 25 feet in length.

He continued to watch as the object moved over the land, passing between the outbuildings and trees as it did so. As he watched he would note that although the object was brightly lit underneath and “gave out light at its own height” it didn’t light up the ground below it. It then passed over the paddocks before coming to a stop hovering over a concrete 10,000-gallon water tank. It remained there for around a minute before descending towards the ground and coming to a stop.

The caretaker quickly ran inside the house and quickly dressed. Then, he got on his Suzuki 100 motorbike, fired up the engine, and headed out across the fields.

Despite the surreal nature of the events unfolding around him, in his mind, he would cling to the idea that this strange aerial display was the work of cattle rustlers. There had, as it happened, been several cases of cattle rustling in the area over the previous months. When he stepped off his bike momentarily to open one of the field gates, though, he would see one of the farm’s cattle close up. Not only was fear palpable in its eyes and demeanor, it was “frothing at the mouth” and quite obviously looked to take cover or hide.

He jumped back on the bike and progressed through the field. Several moments later, he came to the paddock where the strange object had seemingly come down to the ground. He continued on, eventually coming to no more than 50 yards of the object when he brought his bike to a stop. He noticed a strange sensation run through his body. Whether it was his body’s own response to the bizarre situation or something more directly connected to the strange craft, his entire body was “like a jelly on a plate”.

The whistling noise still screeched into the night air, now much louder due to his closer proximity. He would remain sat on his motionless bike, his hands covering his ears such was the uncomfortable volume of it. He would take in as much detail as he could. The top half of the craft consisted of a white dome, while the bottom half was a distinct orange color. In this bottom section, he could make out “circular windows or lights”.

Then, the noise suddenly morphed into “an awful scream” and an ominous black tube emerged from the bottom section of the craft.

As the tube continued outwards, a sudden “bang” rang out followed by an immediate rush of hot air so powerful the caretaker almost lost his balance. As this was happening, the object was now rising from its position and heading slowly to the east. It moved upwards and he could see the connection of the black tube to the underside of the craft at the center.

When it was at a height of around ten feet once again, and around thirty feet away from its position on the ground, it would suddenly go silent. The tube was no longer there. And it looked as though various objects were falling to the ground. He realized these objects were stones, cape weed and various other items that would have been in the area where the object landed.

Starting the bike’s engine, he rode over to the area the object had sat. Even with only the moon as a source of light, he could see a clear “ring of black” on the ground. He looked upwards and watched as the objected continued to move to the east, eventually disappearing into the night sky.

Confused, exhilarated, and awestruck at the same time, he turned his bike around and returned to the main house. When he arrived, he noticed the time was 1:50 am. As he made himself a cup of coffee, preparing to contemplate the evening’s events, he noticed the time on his wristwatch. It showed 1:10. It had stopped at the time he was within the vicinity of the U̳F̳O̳. He took it off and reset it to the correct time and placed it back on his wrist. Ten minutes later, it had stopped again. This would continue for several days until the watch finally returned to normal working order.

He would return to bed, fully dressed, but had little sleep. By 5 am he went back outside and out to the paddock where the encounter had taken place. The black ring was still very visible. He also could see how the grass was pressed flat and tight to the ground in an anticlockwise direction. Any flowers that were previously in this spot had all gone. Within the ring, he also noticed six “spoke marks”. These matched the several spokes he recalled seeing on the underside of the craft when it rose into the air.

He then walked along the direction the U̳F̳O̳ had taken. He could see much of the “debris” that had fallen from the craft as it left. It seemed clear to the caretaker that the long tube appeared to be some kind of suction device. And furthermore, it then sent crashing back to the ground what it had taken but didn’t want.

With that in mind, it was perhaps no surprise, then, when the caretaker discovered later that morning that the entire contents of the water tank – all 10,000 gallons – was gone. The owner of the property would arrive on site at around 9 am. He would report the incident to the “Gippsland Times” newspaper immediately. They would ultimately run a front-page story in their 1st October 1980 edition.

I̳n̳c̳i̳d̳e̳n̳t̳ally, while examining the site that morning, a truck driver walked over from his vehicle to speak with the caretaker. He claimed he had pulled over at the side of the road at just after 1 am to rest. He also claimed that a strange object had followed him for some time, eventually stopping over his field.

Perhaps the most intriguing or noteworthy aspect of the incident is the draining of the contents of the water tank. We have mentioned before, for example, that a considerable amount of U̳F̳O̳ sightings take place over or near to a large body of water. This includes water reserves on land. 10,000 gallons, relatively speaking, is a small amount when compared to state water reserves, lakes, and even oceans. However, it appears obvious that it was very much the target of this strange object.

It would make sense that the need for water would share a connection to the object’s ability to travel. Is it used in the same manner we would use water in our cars and vehicles? Or is it perhaps utilized to create a form of propulsion? A more advanced and cleaner propulsion system?

And how did the craft drain the contents so quickly? It would appear the black tube had somehow pierced the tank from the bottom upon later inspection. However, it would normally take three full days to fully drain the contents. This object managed to do so in less than an hour. Also interesting, was the discovery of algae at the sides of the tank and on the “roof”. Almost as if the separation of impurities occurred before leaving the tank.

Whether this was a simple “resupply” mission or not is open to debate. Perhaps how inconsequential we, or our collective water supplies, appear to be to those behind these strange aerial objects, is a more potent and required question?

The video below looks at U̳F̳O̳ sightings over water and what the reason might be for this. Video : Experts Report That About 82 Alien Species Are in Touch With Earth