Credo Mutwa shares an incredible (and fairly convincing) story from his ancestors about an “a̳l̳i̳e̳n̳” invasion that destroyed humanity; and is the reason for the pain and suffering we see in the world today.

Credo Mutwa is a famous African Zulu sangoma (traditional healer) from South Africa, who has had A̳n̳c̳i̳e̳n̳t̳ esoteric knowledge from his ancestors and predecessors passed down to him that helps to illuminate A̳n̳c̳i̳e̳n̳t̳ history.

More interesting than this though, is the Zulu elder has had personal experience that corroborates this knowledge he was told; and that knowledge includes what we popularly refer to today as reptilians (and he calls Chitauli) ruling over Earth. 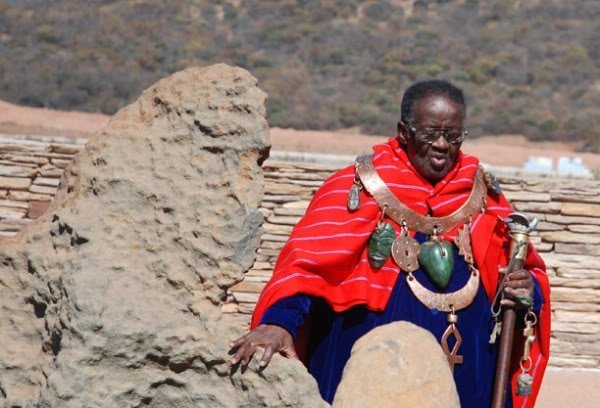 In fact, much of David Icke’s central thesis is derived from Mutwa’s knowledge. In an interview with Rick Martin Mutwa explained that “the Zulus claim that many, many thousands of years ago there arrived, out of the skies, a race of people who were like lizards, people who could change shape at will.

And people who married their daughters to a walking ex̳t̳r̳a̳t̳e̳r̳r̳e̳s̳t̳r̳i̳a̳l̳, and produced a power race of Kings and tribal Chiefs, there are hundreds of fairy-tales, sir, in which a lizard female assumes the identity of a human princess and poses as her, and gets married to a Zulu Prince.”

In his old age (now 94 years old) he has become increasingly vocal about this knowledge and personal experience. Unlike most people though, the Zulu shaman claims these “a̳l̳i̳e̳n̳s” are not really conventional a̳l̳i̳e̳n̳s at all. He believes they are not from a far away planet, but they are actually from Earth or at somewhere near by;

“These so-called a̳l̳i̳e̳n̳s don’t come from far away at all. I believe that they are here with us, and I believe that they need substances from us, just as some of us human beings use certain things from wild animals, such as monkey glands, for certain selfish purposes of our own… Far too many people fall into the temptation of looking upon these ‘a̳l̳i̳e̳n̳s’ as supernatural creatures. They are just solid creatures, sir.”

He also believes that they have sinister intent and before they arrived human beings lived as one;

And the Chitauli told human beings, whom they gathered together by force with whips of lightning, that they were great gods from the sky and that from now on they would receive a number of great gifts from the god.

These so-called gods, who were like human beings, but very tall, with a long tail, and with terrible burning eyes, some of them had two eyes-yellow, bright eyes-some had three eyes, the red, round eye being in the center of their forehead.

All of these great powers the Chitauli took away from human beings and they gave human beings a new power, now, the power of speech.

But, human beings found, to their horror, that the power of speech divided human beings, instead of uniting them, because the Chitauli cunningly created different languages, and they caused a great quarrel between people.

Also, the Chitauli did something which has never been done before: they gave human beings people to rule over them, and they said, “These are your kings, these are your chiefs. They have our blood in them. They are our children, and you must listen to these people because they will speak on our behalf. If you don’t, we are going punish you very terribly.”

In other words, they started creating tribes and tribe lands, which had borders, which they defended against any possible enemy. Human beings became ambitious and greedy and they wanted to acquire wealth in the form of cattle, and sea shells.”

Whether what the shaman says is real or not, is obviously debatable. But it does seem to hold within it a resonance that sounds more tangible than the creationist or big bang/evolution explanations we have been given.

If you are interested in learning more about this incredible story, check out David Icke’s big interview with the African shaman below.