An Australian fisherman recently captured a rare fish with no eyes and sharp teeth – and pictures of the “weird-looking” sea creature have since gone viral on social media. According to the Guardian, Andrew Rose was fishing in the Northern Territory’s Kakadu National Park when he caught the 15cm-long fish. 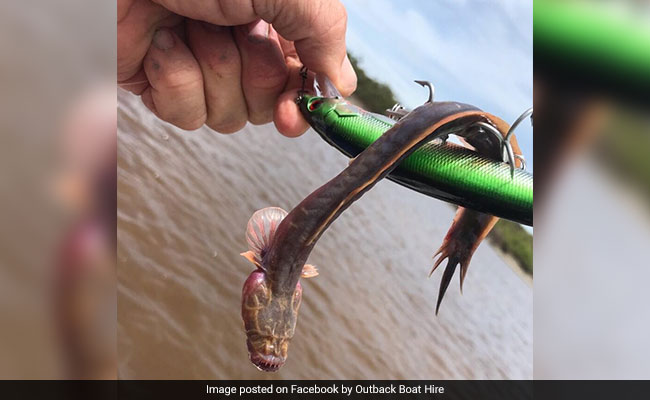 “It looked prehistoric,” says Andrew. “It looked like something you see in the movies. The lure wasn’t swimming right, I pulled it and it had this strange looking fish on it. We didn’t know what it was. We took photos, took him off the hook and put him back in the water.”

Describing the creature as something out of the 1979 movie A̳l̳i̳e̳n̳, Andrew’s friend and fellow angler Tee Hokin told ABC News: “It’s like purpley-brown, it had a really weird head, but the body was like an eel and it didn’t even move or wriggle; it was like stunned, like stealth mode.”

Before putting the fish back in water, Andrew took a couple of pictures that he shared on his official Facebook page. “Has anyone caught one of these before?” he enquired.

The pics soon received a ton of comments as netizens began to wonder what it could be.

Despite all the speculation and wild theories, ABC News reports that the fish was identified as a” rarely seen” worm goby.

Dr Michael Hammer, a curator of fishes from the Museum and Art Gallery of the Northern Territory, told ABC News that the fish appeared to be a worm goby, though there is a chance that it could also be a totally new species.

“They have no eyes and live their life under the mud and are pretty rarely seen by people,” he said.

He also added that they are not dangerous. “They still have very glass-like, small little teeth so a few people have said when they’ve caught them that they get a bite from them, but it’s not dangerous.”

In 2017, a mysterious sea creature washed up on an island in the Philippines, and its pictures soon went viral around the world.