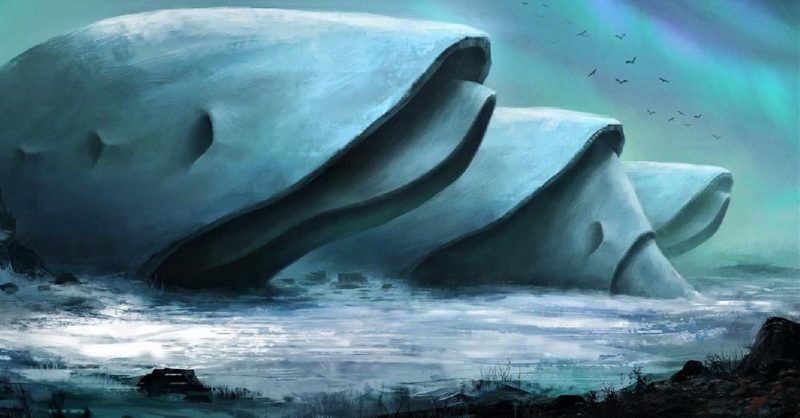 In northwestern Siberia, in the Upper Viliuy river basin, there is a hard-to-reach area that bears the marks of a tremendous cataclysm that took place a few hundred years ago.

It knocked down all the forest cover and scattered rock fragments over hundreds of square kilometers.

The old name for this area is Uliuiu Cherkechekh, which translates to “the Valley of D̳e̳a̳t̳h̳ ”, as locals who venture into this area can hardly make it out alive.

According to the stories of the locals, distributed throughout that area there are mysterious metallic objects located deep in the permafrost.

These are shaped like calderas and are like large iron houses implanted in the permanently frozen ground.

They appear to be made of a metal similar to copper in appearance but, unlike copper, cannot be scratched or damaged. Nobody has been able to cut even a fragment.

Some of these calderas have an opening at the top, with a spiral staircase leading to a circular gallery with several chambers inside.

Despite 40 degrees outside, h̳u̳n̳t̳e̳r̳s̳ say the inside is pleasantly warm.

The locals are unaware of its origin, but they know very well how dangerous it is to approach metallic structures.

In fact, they report some of the effects that calderas have on surrounding vegetation and on the bodies of people who have been stationed near them for a long time.

Some stories tell of some daring h̳u̳n̳t̳e̳r̳s̳ who spent the night in these metal rooms, using them as shelter.

Once back among their people, the h̳u̳n̳t̳e̳r̳s̳ seemed to have contracted a strange disease, and those who had spent more than one night in a row soon died.

For this reason, the elders of the local tribes declared these areas cursed, and therefore prohibited.

The first indirect evidence of the domes dates back to 1853, when Richard Maack, the well-known Russian explorer, anthropologist, and geographer, one of the first to venture into the far east of Russia and Siberia, said in his reports:

In Suntar, a settlement of Yakuts, I am told that on the upper reaches of the Viliuy River, there is a huge metal dome sunk into the ground. […] Its size is unknown because only the circle emerging from the ground is visible. 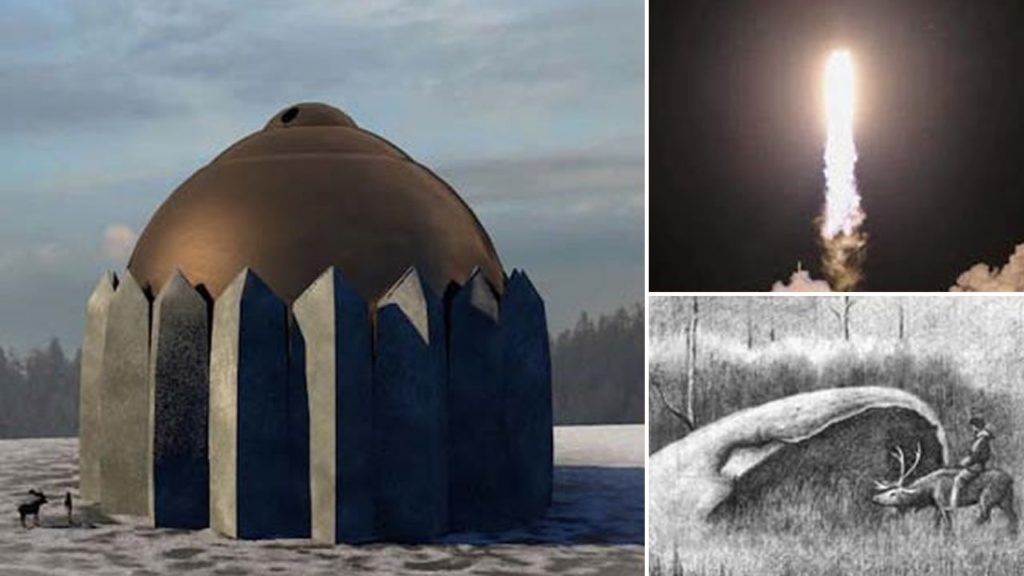 Something similar would say in 1989 Dmitri Arkhipov, an expert anthropologist of the Yakut culture:

Among the population of the Viliuy Basin, there is a legend that goes back to A̳n̳c̳i̳e̳n̳t̳ times, that there are huge bronze domes or olguis on the upper part of that river.

In 1936, on the banks of the Olguidakh (“meaning place with a cauldron”) river, a geologist led by elderly natives stumbled upon a hemisphere of smooth, reddish metal, jutting out of the ground with a sharp edge “I would cut a nail.”

Its walls were about two centimeters thick and it protruded from the ground about a fifth of its diameter.

And according to the official report, it was possible to see inside the dome through a hole in the back.

Among the most accurate reports is that of Mikhail Korecky of Vladivostok, who in 1996 sent a letter to the Trud newspaper claiming to have been to D̳e̳a̳t̳h̳ Valley three times.

Korecky claimed to have seen seven domes between 6 and 9 meters in diameter.

On his last visit to the domes, Korecky and his friends spent the night in one of them.

Although nothing in particular happened that night, in the following days one of his friends found himself losing almost all of his hair, while Korecky developed two small pustules on his cheek that never healed.

In 1971, an old hunter belonging to the Evenk people, had said that in the area between two rivers known as Niugun Bootur (“or champion of fire”) and Atadarak (“place with a three-sided harpoon”), protrudes from the ground what which gave its name to the place, a three-sided iron harpoon “quite large.

While in the area between two rivers known as Kheliugur (“or iron people”), there is an iron burrow in which strange, thin, black-skinned, one-eyed beings, clad in some sort of iron suit, lie asleep. ».

He said he could take people there, that it wasn’t far, but no one believed him. Some time later, he died.

Yakui legends about the Valley of D̳e̳a̳t̳h̳ contain many references to explosions, whirlwinds, and huge blazing balls of fire.

And all these phenomena are associated in one way or another with the mysterious metal constructions found in the Valley of D̳e̳a̳t̳h̳.

Some of them are large round “iron houses” that are supported by numerous lateral supports.

They have no windows or doors, just a “spacious manhole” at the top of the dome.

Some of them have almost completely sunk into the permafrost, leaving only a barely noticeable arc-shaped protrusion on the surface.

Unknown witnesses describe this “resounding metal house” in the same way. Other objects scattered around the area are concave metal lids that cover something unknown.

About every six or seven centuries, a monstrous “ball of fire” shoots out from there, and flies off somewhere in the distance.

And judging by the chronicles and legends of other towns nearby, sometimes it explodes directly over its point of departure, as a result of which the area for hundreds of kilometers around is reduced to a desolate desert.

The most intriguing is from Russian researcher Valery Uvarov, and he says that Siberia’s mysterious domes may be an A̳n̳c̳i̳e̳n̳t̳ weapon built by a̳l̳i̳e̳n̳s to protect our planet from any external dangers, such as meteorites or hostile a̳l̳i̳e̳n̳ forces.

Uvarov is convinced that the e̳x̳t̳r̳a̳t̳e̳r̳r̳e̳s̳t̳r̳i̳a̳l̳ defense system has come into operation several times in the last hundred years:

One of them was in 1908 shooting down the famous Tunguska meteorite .

When the Soviet military surveyed the area, they reported finding fallen trees for thousands of miles around the blast site, but found no craters.

If those massive metallic structures buried in the Siberian soil really exist… Could it be that these so-called cauldrons serve as a kind of anti-aircraft weapon against space threats?

Or will they have another very different, and obscure, use that we have not yet discovered? Who created them and why?

Russia’s valley of de̳a̳t̳h̳ remains a mystery to scientists, researchers, and adventurers, and while many suggest these stories are exaggerated, some believe there is some truth to them.

The secrets of Siberia’s D̳e̳a̳t̳h̳ Valley are dark and shrouded in mystery, and investigating them is not without risk.

From the deepest parts of the region’s history, something is hidden in this murky region, and its secrets, it seems, will remain hidden for a long time.