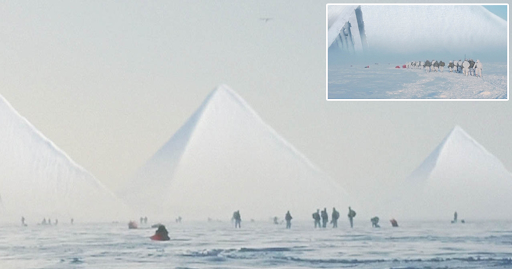 Back in 2012, a new discovery was made on the frozen continent which archaeologists were stoked to explore. Three giant pyramids were spotted in the midst of Antarctica and as soon as they came upon them, they instantly wanted to figure out whether the constructions were natural or artificial in nature.

After coming in contact with them they declared that they were artificial and they were set to explore their insides one after the other.

However, as soon as they entered the structures, they were left off with no signal whatsoever, they were instantly cut from the base, losing any sort of contact in an instant.

Luckily, some footage was recently leaked of the expedition, and you can see it yourself below at the bottom of the article.

Although nobody knows the original constructors of these pyramids a lot of people believe that they were originally built before the A̳n̳c̳i̳e̳n̳t̳ Egyptian pyramids.

According to the Piri Reis map, Antarctica was once a green continent blooming with fauna, and the pyramids have signs of water erosion on their outside which might be proof enough of that.

But why would they keep it all secret? What reason could they possibly have for this?