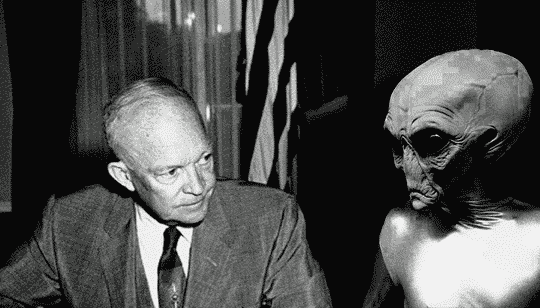 It is widely known that President Eisenhower was extremely interested in alien lifeforms and UFOs and it is believed that he met with extraterrestrials on multiple occasions. According to former Pentagon consultant, Eisenhower met with aliens on at least three separate occasions, once at Edwards Air Force Base (AFB), California, and twice at Holloman AFB, New Mexico.
1954 Eisenhower’s first meeting with ET’s

In February, 1954 President Eisenhower went missing for several hours one Saturday evening and didn’t turn up again until the following morning. During this time, the president missed a scheduled public dinner and when questioned about his absence, the White House Press Secretary stated that the president had a dental emergency.

This seems like a completely normal, and rather dull, reason for missing dinner. But upon closer inspection, the President’s excuse doesn’t really stand up. All of the former President’s medical and dental records are held in files in the Eisenhower Presidential Library.

On this particular occasion, the Eisenhower happened to have been on vacation in Palm Springs and there are no records relating to a dental appointment made whilst in Palm Springs. The records are so detailed that they contain copies of acknowledgments that were sent by the President to everyone that he met whilst on holiday. There are copies of acknowledgment notes that were sent to people that he met on the plane, the minister at the Sunday service that he attended, and others that he met on his travels. However, there is no mention of any dentists. Surely, if the President needed emergency dental care, the dentist would have received a thank you note! Seems a little odd, don’t you think?

If Eisenhower Didn’t Go To The Dentist, Where Did He Go?

Another man, named Gerald Light, claimed to also have present at this first meeting. In April 1954 he wrote a letter that detailed the happenings of this meeting.  His account is quite similar to Commander Sugg’s account but Light also included details like watching the Air Force agents inspecting the alien aircraft.

The credibility of Light’s letter has been questioned by some, as they believe that his interest in the occult meant him to be an unreliable source. Meade Layne, the former director of Borderland Sciences Research Foundation, on the other hand, believes Light’s letter to be a legitimate first-hand account of the meeting!

Approximately a year later, Eisenhower met with aliens again. In February 1955, at Holloman AFB there was an incident where the radar was turned off following the landing of Air Force One. While the president’s plane was on the tarmac, shortly after the radar was switched off, three round-shaped objects appeared in the sky. According to eyewitnesses, one of these UFOs landed near the Air Force One, whilst one hovered nearby, and the third disappeared from view. According to the witnesses, a man (presumably Eisenhower) approached the steps of the UFO and shook hands with the extraterrestrial that appeared at the door. It is then believed that the president entered the unidentified aircraft, unaccompanied, for forty-five minutes.
What happened in the saucer?

According to noted author, and former Pentagon consultant, Timothy Good, the aliens’ visit was again regarding the testing of nuclear weapons. According to Good, the ETs were concerned about unrest on planet earth and they wanted to offer solutions to achieve peace. Good explains that at first, the visitors wanted the public to be told about their existence but later, they changed their minds.

According to Good, Eisenhower signed a treaty with an alien race, known as Alien Grays. Good states that the terms of the treaty were as follows:

An agreement not to become involved with each other’s affairs.
An agreement not to inform the public about the existence of ETs.
Alien Grays agreed to help us develop our technology.
Eisenhower also agreed to let the aliens abduct humans, for use in experiments, as long as they provided the names of all abducted to the Majestic 12 committee.
The Alien Grays agreed not to engage in any other treaties with other nations on earth.

The Third and Final Meeting (that we know of)…

In 1964, eyewitnesses reported UFOs landing a Holloman AFB. Three UFOs were tracked on radar, and filmed entering the air space. It is reported that after landing their craft, three humanoid creatures were met by Air Force Base Commander and four other officers. These beings were dressed in flight-suits and they had pale-gray skin, the exact same as earlier eye-witness reports. Unfortunately, there are no public records or accounts of this meeting so the purpose of their visit remains unknown.
In the midst of so many government cover-ups, top-secret documents like Majestic 12, and more, it’s impossible to tell what the government is hiding. Considering the sites of these encounters with aliens and the Roswell crash site are in such close proximity. It’s also worth noting that all happened within ten years of each other.

It makes sense that the existence of aliens were hidden, maybe for public safety, but in the modern age, is that really necessary? Maybe that’s not all they’re hiding! In this case, given the amount of evidence, it would be difficult not to believe that Eisenhower met with aliens. 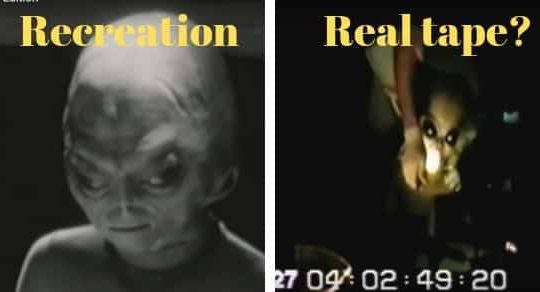