Humanoids, the old world is passing before our eyes in the flash of a broadband optic fiber network. It seems society barely remembers what happened two years ago, much less twenty years ago or two hundred. For thousands of years, the twin pressure of history and tradition laid heavy on the world, as generation after generation were raised in the same beliefs and surroundings.

That is all sadly fading away, but some traditions die harder than others. Many such traditions involve the occult…both the practice of it and the shunning of it. That’s what we will be delving into today, seekers of the strange, looking into the recent past and finding traces of a grim and A̳n̳c̳i̳e̳n̳t̳ practice. The ritual scouring and murder of a witch!
Our eyes turn to rural England and the small village of Long Compton. Long Compton sits in the shadow of megalithic monuments called the Rollright Stones which have brooded there since time immemorial.

Like mighty Stonehenge, the exact origin of the Rollright Stones remains a mystery, but there is no doubt they predate Christianity by many, many generations. The Stones have been the sight of occult practices and occurences for as long as there has been a record. To this day, they have an ominous reputation. 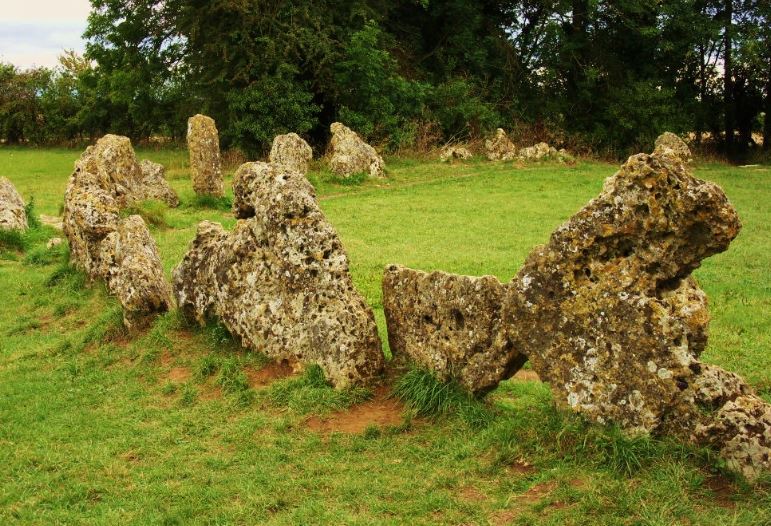 The area has been the scene of witchcraft and witch burnings for centuries. In the year 1662, the height of the witch hunt frenzy in England, a woman named Isobel Gowdie was burned as a witch. Neighbors suspected the eccentric old woman using teams of toads to plow the fields near her home. This idea of witches using toads as servants dated back to Roman times and before.

One would think that by the more sophisticated 1800’s, witch killings would be a thing of the past. But one would be wrong. In the 1870’s, an old widow named Anne Tenant was brutally murdered by a mentally retarded young man who regarded her as a witch. John Heywood the killer described the method he used to slay her: “I pinned her to the ground with a pitchfork before slashing her throat with a bill-hook to carve a cross.”

Anne Tennant was also suspected of using toads in her magical rituals. Already, we see the pattern of long tradition creeping into the region around Long Compton.

The twentieth century brought perhaps the most baffling and difficult case of occult murder yet to this otherwise bucolic area of England, not far from the birthplace of Shakespeare. Near Long Compton and the Rollright Stones is another small village, Lower Quinton.

There, in the 1940’s, lived a peculiar old man named Charles Walton. Walton lived a hermit like existence outside the village with Edith Walton, his unmarried niece and the only person he had regular commerce with. Walton eked out a bare living by working as a hedge cutter in Lower Quinton.

Despite his harmless appearance, the superstitious villagers seemed to fear Charles Walton. Like Isobel Gowdie and Anne Tenant before him, it was whispered that he bred huge, demonic toads and that he also had uncanny control over horses and birds. He seemed to be a virtual “Dr. Doolittle”, who could talk to the animals. But instead of amusing the people of Lower Quinton, this ability frightened them instead.

On Valentine’s Day, 1945, Walton left to cut hedge at the nearby farm of Alfred Potter. He never returned. As night fell and he had not come back to his cabin, his niece Edith became worried and fetched help to find her uncle. Find him they did, but not alive. Charles Walton had been horribly murdered in a strange, ritualistic fashion. 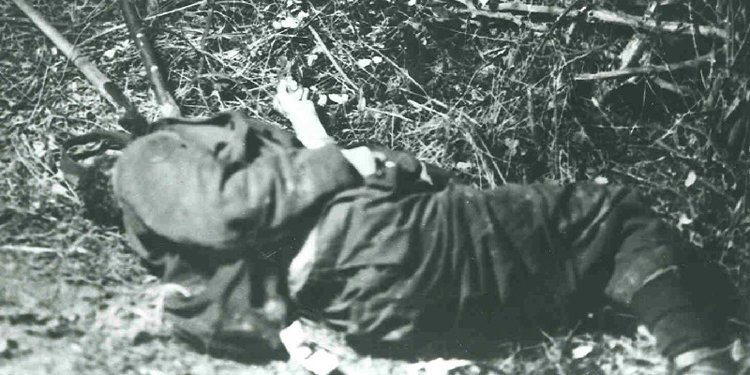 The old man’s neck had been pierced by the twin prongs of his own pitchfork. So powerful was the thrust that the tines of the pitchfork stuck six inches into the ground. Walton had been mutilated in other ways as well…his bill-hook had been used to carve crosses into the flesh of his cheeks and stomach and between the two prongs of his pitchfork.

His skull had been caved in with a heavy cudgel and the bill-hook was savagely thrust into his rib cage. What Edith and the policemen who found Walton most remembered was the look of sheer horror in the hedge-cutter’s eyes.

The local police took little interest in the case for some reason, but it came to the attention of Robert Fabian, the famous “Fabian of Scotland Yard”. Fabian was renowned as the greatest detective in England and a man of relentless logic.

Superstition meant nothing to Fabian…like “Dragnet’s” Joe Friday, he dealt in facts and only facts. But the facts of the Charles Walton case did not really add up and thrust the rational detective into a supernatural world he had never encountered before.

Upon arriving in Lower Quinton, Fabian and his men were met with silence from the locals. These small English villages were often worlds of their own, almost on another planet compared to cosmopolitan London, and the conservative, traditional villagers did not talk easily to outsiders. Especially concerning the murder of a strange old man most regarded as a witch.

Weird, uncanny incidents plagued the investigation from the start. While exploring the area near Walton’s murder, Fabian realized he was being watched by a large black dog. When a boy came out to ask what Fabian was looking for, the inspector asked if the dog belonged to the boy. “What dog?” asked the child.

Fabian turned and the dog was gone. That was not the last time a black dog was encountered during the investigation. One was found hanged from a tree in nearby Meon Hill. Nobody claimed ownership of the dog. Soon after, a rash of dog fatalities struck the region.

Black dogs often appear in tales of the supernatural in England. The spectral hounds are often seen as portents of doom or agents of evil. “Black Shuck” was the most legendary of these canine creatures, terrorizing graveyards and frightening passerbys to de̳a̳t̳h̳.

Fabian learned that Charles Walton himself had seen a black dog on Meon Hill in his youth. For nine straight days, the young Walton had seen the creepy canine. Another sign that the man was cursed, the villagers reckoned. 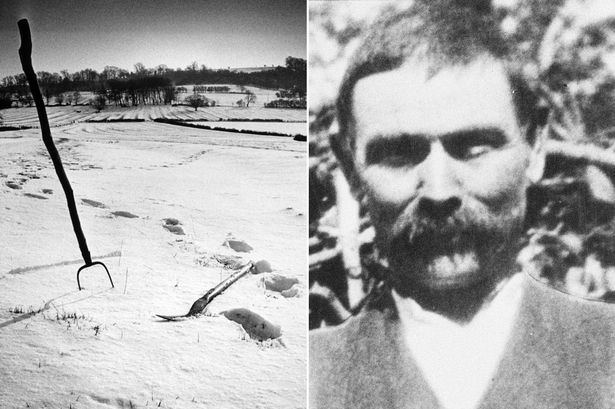 Fabian began to look more deeply into the history of not only Charles Walton, but the area around Lower Quinton as a whole. He was soon stunned to discover the similarities between the murders of Walton and Anne Tenant. Both skewered to the ground by pitchforks and mutilated by bill-hooks. The resemblance between the killings smacked of ritual. Yet the crimes were over 60 years apart. Fabian also learned of Isobel Gowdie’s burning in 1662. The tough-nosed Inspector felt he was in the grip of something uncanny.

Walton was murdered on Valentine’s Day. That day had special signifigance to the Druids who once lived and worshipped near the Rollright Stones. It was the day that they sacrificed to their harvest gods using “wicker men”…giant hollow images of men that were filled with victims and then burned.

Fabian also learned that the year prior to 1945 had been a particularly poor one in Lower Quinton as far as agriculture went. The village’s livelihood depended on a good harvest and 1944 had been one of the poorest years on records. The people there may have looked to Charles Walton with suspicion, blaming the so-called witch for their misfortunes.

Fabian continued to use every scrap of knowledge he had accumulated over a vastly successful crime-fighting career to get to the bottom of Walton’s killing. Over 4000 statements were taken from local people, including Edith Walton and Alfred Potter, and hundreds of samples of physical evidence were examined. But nothing pointed to one particular person. The citizens of Lower Quinton remained closed-mouthed and inscrutable. It seemed as if the entire village was arrayed against Fabian.

Finally, the gritty Inspector admitted defeat and retreated back to the more mundane criminal world of London. The murder of Charles Walton resisted a solution. It seemed the twin traditions of witchcraft and witch hunting still held sway in the picturesque little town. Fabian returned years later to the village to examine the evidence again but could never crack the case.

It seems Charles Walton and his rapport with animals fell into a long tradition of individuals with mysterious powers in the rolling hills of rural England. Unfortunately for him, the tradition of ritual witch killing was just as strong.

So, humanoids, the next time you feel the urge to grab that Ouija Board or play silly Wicca Games, remember the words of Robert Fabian regarding the supernatural:

“I advise anybody who is tempted at any time to venture into Black Magic, witchcraft, Shamanism…call it what you will…to remember Charles Walton and to think of his de̳a̳t̳h̳, which was clearly the ghastly climax of a pagan rite. There is no stronger argument for keeping as far away as possible from the villains with their swords, incense, and mumbo-jumbo. It is prudence on which your future peace of mind and even your life could depend.”